EDIT: Some updates since yesterday:

-The wedding will take place at Windsor Castle (St. George’s Chapel) in May 2018 (Kate will give birth in April)

-Meghan will become a UK citizen after they marry

-Their first joint engagement will be on Friday (check back here for coverage!)

-The Royal Family will pay for the ceremony (I mean, duh)

After a year and a half of dating, Prince Harry, 33 and fifth in line for the throne, got engaged to Suits actress Meghan Markle, 36. The engagement was announced by Clarence House this morning, followed up by an appearance in the Sunken Garden at Kensington Palace and an interview with BBC. The wedding is set for Spring 2018. 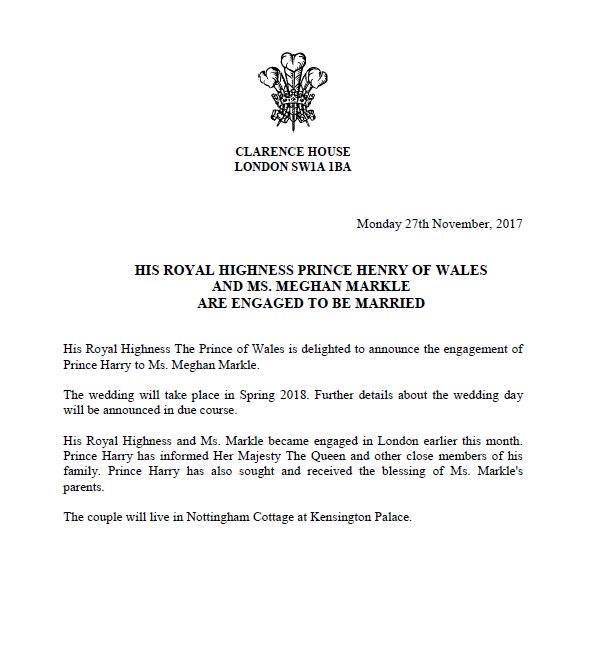 You can watch their full interview here.

I had never heard her interviewed before and honestly didn’t know much about her. She has largely stayed out of the public eye, both before and after becoming involved with Harry, with the exception of the Vanity Fair print interview in which she wasn’t allowed to say very much. She is very well spoken and seems really sweet. She also clearly benefits from her skills as performer, as she comes off very in control and on message. Overall, they seem very sweet and happy together and very much in love.

Now let’s break down some of the details….

Introduced by an unnamed mutual friend in July 2016, they went on two dates in two days. After Meghan returned to Toronto, they kept in touch, and Harry convinced her just four weeks later to join him on a camping trip in Botswana. They were able to keep their relationship secret for almost six months, before the news broke and Harry released the official statement heard around the world, signifying his commitment to Meghan and, to royal watchers, a clear sign that an engagement was likely. When asked by reporters at the photocall when he knew Meghan was “the one”, Harry very sweetly responded “the moment we met”. Awwww!

Who knew roast chicken was so romantic! Harry got down on one knee and proposed to Meghan while cooking roast chicken at home in Nottingham Cottage. In their interview, they laughed about how Meghan didn’t let him finish before asking “can I say yes now”. In their statement they said they’ve received the blessing of Queen Elizabeth, as well as Meghan’s parents.

The ring is yellow gold (“her favorite” says Harry!), with the center stone from Botswana, where they first vacationed together, and the side stones sourced from Princess Diana’s collection. Harry designed it himself with help from QEII’s go to jeweler, Cleave and Company. It’s lovely and classic, although for me nothing will ever compare to the sheer glamour and history of Kate’s ring.

Meghan bundled up in a coat for the morning photocall, and revealed teh dress she was wearing underneath during the BBC interview. Both looks were classic and unimpeachable. And in case you want to buy any of the pieces she wore, well, tough luck- of course, they’re all sold out!

This winter white wrap coat is from Canadian brand Line and the shoes are Aquazzura. Not a fan of beige with white, but at least these are an interesting take on the basic beige pump. The dress she wore during the interview is from another brand I haven’t heard of before, P.A.R.O.S.H. Big fan of the emerald green.

A royal wedding of course! Here’s what to expect in the coming months:

-They will likely be known as the Duke and Duchess of Sussex, titles QEII will bestow on them the morning of the wedding. For those wondering, the title of “Princess” is only given to those born into royalty, not us poor commoners.

-Despite the wishes of Kate fans and royal watchers, Duchess Catherine will likely NOT be a bridesmaid or involved in the wedding other than as a guest. She will also be heavily pregnant, or have just given birth, at the time.

-The guest list should be very interesting, with the regular Royals in attendance, as well as some Hollywood and Canadian royalty. Meghan has noted friendships with Serena Williams and her suits co-stars.

-They have been given permission from the Archbishop of Canterbury to marry in a church if they choose- an exception that needed to be made due to Meghan’s divorce.

-No kids on the horizon as of now, but when they do have little ones, they will likely be known as Lord and Lady, instead of Prince and Princess.

-People are already taking bets on who will design the wedding dress. My two cents is it won’t be McQueen, so as to not be a copy-Kate. Other than that, I don’t really have any good guesses. I could easily see her going with a Canadian designer, as an ode to her home of the last 7 years, or a classically British designer to acknowledge her new country of allegiance.

Some more fun odds and ends…

-This is a great opportunity to remind everyone that Prince Harry’s given name is actually Henry!

-Current best guess for the female friend who introduced the pair is designer Misha Nonoo. She’s a very close friend of Meghan’s (she wore her “Husband Shirt” in her first official public appearance with Harry at the Invictus Games) and her ex-husband went to Eton with William and Harry, attended the Will and Kate’s wedding in 2011, and his younger brother even dated Pippa Middleton!

-Apparently the Queen’s corgis have never been a fan of Harry, but took to Meghan right away!

-Meghan will be the first American to marry into the Royal family since Wallis Simpson married King Edward VIII in 1936, forcing him to abdicate. Simpson was also a divorcee, like Meghan.

-We all sighed a collective “awww” when Harry said that his mother and Meghan would have been “thick as thieves”.

View all posts by fashionwonk